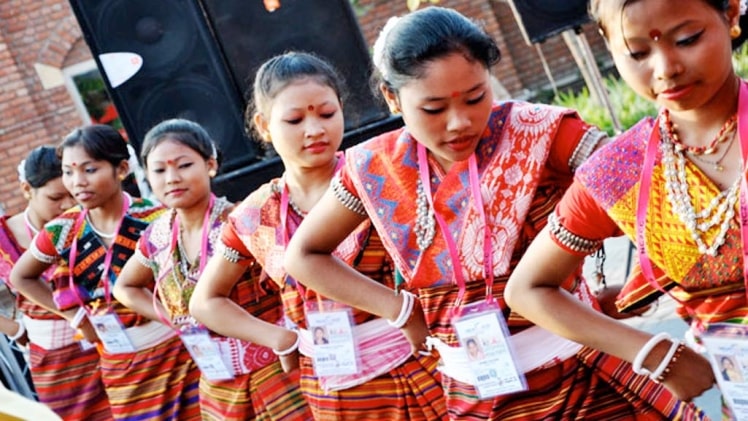 You might know of Bharatnatyam, Kathak, and Kuchipudi, but few know much about the beautiful classical dance form hailing from Manipur, called Manipuri dance. Even fewer know that that’s not the only folk dance that originates from this lovely state in the northeast part of India. This article will discuss and appreciate 5 popular dances hailing from Manipur. If you’re in the mood for some gold jewelry, click here to know the gold price in Sikkim.

You might know “Raas Leela” simply as a dance and drama form in the north – but there’s more to it. Manipuri raas leela is said to have originated before history started being recorded, thanks to its divine and religious connections. This dance is popular not just because of its graceful movements, gentle expressions, and beautiful costumes but because of the divine devotion in its heart. The goal of this dance is generally to express Bhakti Rasa (emotion of devotion). The dance is based on the Shastras of Vaishnavism (worship of Lord Vishnu or Krishna). Know more about the gold price in Manipur here.

This interesting folk dance emerges from the Tanghkul Naga community in Manipur. It is performed during many traditional functions in the state. The dancers usually wear traditional black and red clothes and depict the simple lifestyle of the community and the different stages of cultivation in their dance.

“Huyen Lalong” translates to “the art of sword and spear”. As the name suggests this dance depicts a fascinating performance of various martial arts and weaponry. This traditional dance originated from the war environment (medieval times) in the northeast and now continues to be part of Manipuri culture. There are three ways in which this dance is performed: the first form of the dance is ritualistic/tantric, the second form involves a grand display of swords and spears, and the third final form is the most extreme: the dance converts to a real fighting experience webtoon.

This one holds a special place in the folk dances of Manipur as it includes a range of dances tied together with the grand Lai Haraoba festival. This festival is celebrated by the Meiti people of Manipur to please their dieties in Sanamahism (religion in the northeast). This festival sees a range of different manipuri folk dances such as Thougal jagoi, Laiching Jagoi, Panthoibi Jagoi, and more. Each of these dances are unique in their own way.

Thabal Chongba translates “dancing in the moonlight”, and this dance is as beautiful as its name’s meaning sounds. The dance used to be traditionally performed in the moonlight during the Yaoshang festival, which is considered an important festival in Manipur and takes place during 5 days of spring. During Thabal Chongba, people gather together in a circle and dance together by hopping on one foot and swinging their arms together. It is in simple terms simply the celebration of spring and happiness amongst the folks.

GoMovies123 is a pirated movie downloading site, so be careful when downloading from there.

Best Night Routine for Your Infant This Fall

Why It Is Important To Hire A Professional Sewer Repair Services?

How many charms fit on a Pandora bracelet?